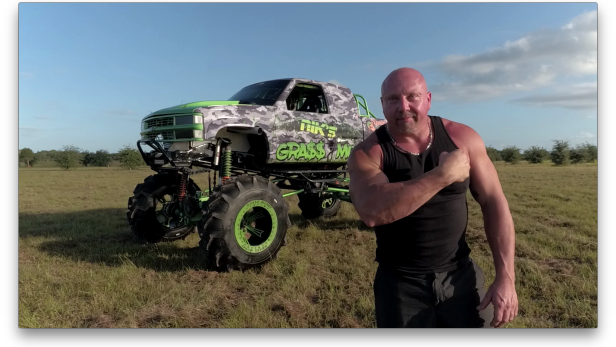 Grass Money is the name of Nick’s mega truck– but it’s also what he does for a living, as a landscaper of 20 years. Nick comes out to the Proving Grounds to face off against anyone who will take on his huge truck–and the huge dude driving it. If his size intimidates anyone,he’s going to use it to his advantage on the track.

Nick has been around racing his entire life – his dad was a drag racer,but that sport was over too fast for Nick’s taste – he needed more power and adrenaline, which he found in his big block Chevy that he called Grass Money –and if he can go away with a win and some money in his pocket, it’s been a good weekend. Nick will take on anybody who’s not afraid of his size, but he’s looking forward to Grudge Matching Mark Herston out of the Georgia Guzzlers in the HMB (HoldMyBeer) Mudder.